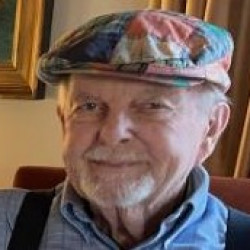 On Monday, March 21st 2022, William James Livesey passed away peacefully at age 86, surrounded by his family and loved ones.

William, who went by Bill, was born on Easter Sunday, April 21st, 1935, to William James and Margaret Toner Livesey. He grew up in Riverdale, NY. Bill attended City College of New York where he earned a Bachelors and Masters Degree and was a member of the Delta Alpha fraternity.

He met the love of his life, Eleanore, during his sophomore year of college when he crashed a party that she was hosting at Hunter College. They were married July 6th 1957 at St. Teresa’s Church in Pelham Bay, NY. A skilled builder and woodworker, Bill built the house where they still reside in Chappaqua, NY, and filled their walls with paintings.

Bill spent 37 years of his career as a teacher and administrator in New Rochelle, NY, first as an Industrial Arts teacher at the Isaac E. Young Middle School, and later as the Arts Supervisor across the two middle schools and high school.

Bill was devoted to his family. He shared his love of the outdoors with his children, introducing them to the U.S. National Parks by motor home and spending summers in their cabin in upstate NY. He loved his grandchildren dearly and played a meaningful role in raising them. He will be remembered for all of his jokes, songs, and the lessons he gave them in art, woodworking, chess, tennis, and sailing.

Bill was a kind, creative, and cheerful man, known for his great sense of humor and quick wit. He had the rare ability to put a smile on everyone’s face and make them feel warm and welcomed. He was a lover of Boston Terriers, which his mother raised while he was a child, and cherished his own – Frisky and Spanky. He spent 30 years snow-birding in Siesta Key, FL where he enjoyed his favorite pastimes of tennis, boating and fishing.

In his final days he told his family, “I’ve had a really good life,” and when asked about the best part, he turned to his wife, Eleanore, pointed and said, “You!” He will be deeply missed by his entire family and many dear friends, who will carry him on in their hearts and spirit. A Celebration of Life will be held in Westchester County, NY this summer. As Bill would always say, “Cheerio!”.