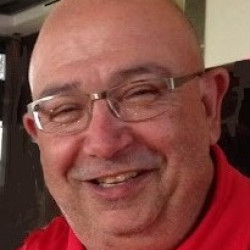 Thomas Masillo, age 67, passed away so unexpectedly at home on June 16, 2022, taking our hearts with him. Tom was born on March 21, 1955 in Queens, New York to parents Rose and Vincent Masillo. He grew up in Oakdale, New York with his three sisters and one brother who dearly loved him.

He is survived by his wife, Rosemary Paparatto Masillo, whom he married in 1981, her brother, Joseph Paparatto, and sister-in-law, Robin Rosen, sister Rosemarie Tufarelli and her husband Don, sister Patti Zontanos and her partner, Sheldon Gerard, as well as many nieces, nephews, and cousins. He will also be sorely missed by his beloved cats, who were loved and amazingly cared for by Tom. Tom was predeceased by his mother and father Rose and Vincent Masillo, his sister Blanche Maddie and brother, Vincent James Masillo.

After graduating from St. John’s University in 1977, Tom worked in Computer Operations for several major companies starting with Grumman Aerospace Corporation in Bethpage, NY. In 1981 he married the love of his life, Rosemary and moved to Ronkonkoma, NY. As life changed, Tom and Rosemary moved to Sarasota, Florida in 1997. Tom then began working for Franklin Templeton Investments as a production control analyst, for Time, Inc. as a scheduling services technician, and at Sarasota Memorial Health Care as an operations analyst. He also held a state certification in Professional Development Studies from Stony Brook University. Tom was a superb writer and almost began a writing career but chose a different direction for his life. He had a love of baseball and after he moved to Sarasota, the Tampa Bay Rays was his team. Tom and Rosemary enjoyed going to baseball games at Tropicana Field, including local spring training games where they would often meet the Tampa Bay Rays players and get their autographs. For many years, Tom was also involved in a fantasy baseball league.

What Tom will be remembered most for is his spirituality and love of humanity. In 2014 he became an ordained Chaplain through Chaplain Fellowship Ministries International, certifying him in Counseling and Nursing Home Ministry. Tom was very involved with Freedom Ministries for the homeless, veterans and spiritually hungry as a Chaplain and was a spiritual mentor at the Salvation Army. If you needed help, if you needed an uplifting word or financial support, there is nothing Tom wouldn’t do for you. His kindness for those in need, combined with his love of God was unsurpassed. Those Tom ministered to will acutely feel his loss along with those of us family and friends who will never forget him and the kindness he showed others. There was nothing like Tom’s smile, his unbelievable sense of humor and endless love for all mankind.

There will be an open Celebration of Tom’s Life in Sarasota at a later date and details will be provided on this website when they are available. Carry on Tom’s legacy by donating to any church or organization that helps those in need or to those in need directly and Tom’s love will be never ending.