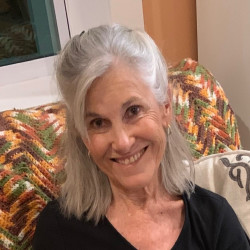 Sharon was born in Smithers West Virginia on July 19, 1945. She Moved to Sarasota with her parents in 1955 and graduated from Riverview High School in 1963.

After raising her family, she relocated to North Carolina in 1993 and Spent 23 years in Polk County where she worked at Hospice of the Carolina Foothills. In 2017 she decided to return to Florida to be with her family where she lived until her unexpected death.

Sharon was a lady in all senses of the word, and a truly compassionate soul to everyone who knew her.

She Loved nature and animals and spent as much time in the outdoors as possible. She loved the mountains of North Carolina and hiked there whenever she could.

Sharon was an avid walker and participated in several endurance races. She loved riding her bicycle around the neighborhood and talking with her neighbors.

She donated to charities helping impoverished children and unwanted animals.

She enjoyed genealogy and was proud to have been traced to American Colonists who served in the Continental Army during the Revolutionary war.

Sharon is preceded in death by her mother Elizabeth Jamison (Allman) of Sarasota, formerly of Smithers WV. And her father Joseph Jamison of Sarasota formerly of Logansport IN.

She is survived by Her son Robert Jordan and daughter-in-law Peggy Jordan (Froehlich) of Myakka City, Florida.

And her kind and loving partner in travels and life Warren H Strauss of Bradenton, Florida

There will be a private service held at a later date.