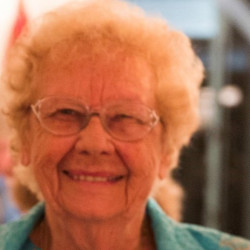 Ruth Herrman, age 92, passed away in Sarasota, FL December 22, 2022. She was born in Grand Rapids, Michigan to William & Elsie (Frueh) Herrman in 1930, grew up in Grand Rapids and graduated from Michigan State University, later earning her Master’s degree.

Ruth’s lifelong career was in teaching. Her pride was in her school and students, and she shared her passion for learning with hundreds of students over the years. For most of her career, Ruth taught elementary school for the Department of Defense Dependents Schools (DoDDS) in seven countries from 1960-1992, including: Japan, Turkey, Germany, England, Spain, Ethiopia and Italy. During her teaching career, she made a positive difference in the lives of her students and was much loved by them; sometimes being recognized years later by a student on her travels around the world. Ruth traveled extensively around the world, and joked she had visited every country except Antarctica. She was one of the anchors of a core group of retired DoDDS teachers that settled in Sarasota, FL and was inspiration for other DoDDS retirees who eventually settled in the Sarasota-Bradenton area.

Ruth lived an extraordinary life.  She was kind, caring, smart, inclusive, inquisitive and always had a positive outlook. She was a problem solver, and never had a negative thing to say about anyone. Ruth loved entertaining. She had a vast social network and was famous for throwing great parties. She walked daily, often stopping to say hello or chuckle over something with neighbors or passersby, and always offered up a warm smile or a compliment.  An avid reader, she also enjoyed crossword puzzles and sudoku. She had the energy of those twenty years younger, and took Zumba classes at the local community center. Ruth supported and had a great fondness for the arts, and she attended concerts, plays, opera and dance. She was a supporter of public TV and many scientific, medical and nature organizations. She was an inspiration and a role model for all of us, was beloved by all who knew her, and will be greatly missed.
She is survived by her sister, Martha, and her nephews Randy (Christy) and Kurt, and many, many loving friends.
She is preceded in death by her parents; brother, William Jr. and sister, Betty (Bruce); and nieces, Sally and Nancy.

Memories and condolences may be left for the family online at www.yourtraditionsfuneralhome.com
Your Traditions Funeral Home of Sarasota, FL is handling arrangements.