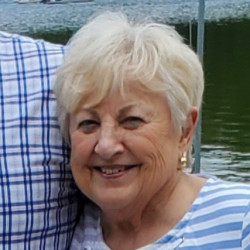 Peri L. Hoebeke passed away on Friday January 21, 2022. Peri was born, March 15, 1938 in Grand Rapids, Michigan to the late Gerald and Francis Dutmers. She graduated from Creston High School in 1956. During High School she worked at Ferguson Hospital and Norwalk Trucking. After graduating she worked as an assistant for Dr. Lucian Griffin. Peri and her husband Frank Hoebeke were married in 1957.

Together they built a successful construction business in 1963 until they both retired in 2005. Although Peri continued to help her husband with their business, she also took a position as a receptionist with Hudson Personnel. Several years later she worked as an office manager for Dr. Newton and Dr. Maskill at Plainfield Medical Center and Emergency Care Practice. Peri was on the board of three home owner associations and treasurer of one. Upon retirement in 2005 they spent their winter months in Venice, Florida. They also enjoyed spending time with their many friends at their cabin on the Big Huron River in Arvon Township, Baraga County, Michigan. As a young girl Peri enjoyed ice skating, and along with her sister Lynn they were competitive swimmers and medaled in several state events. She had a 145 average as a bowler and liked playing golf. What she loved most was spending time with her family.

As per Peri's wishes she has been cremated.  The Family will have a Memorial Service to celebrate Peri on May 12, 2022, 11:00 am at St. Patrick’s Church in Ada, Michigan.  Family and Friends can visit with the family one hour prior.  A luncheon will take place at the Parish Center immediately following.