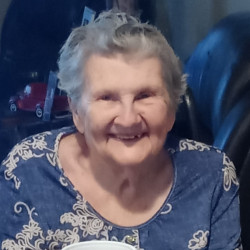 John 14:1-4 “Do not let your hearts be troubled. You believe in God; believe also in me. My Father’s
house has many rooms; if that were not so, would I have told you that I am going there to prepare a place for
you?

Mildred Cornthwait quietly went to be with the Lord on January 4th, 2023. She was 88 years old. She
was born in Sharpsville, PA August 27th, 1934. She was the daughter of Roy and Mildred Ross. Her
father affectionately called her Tom because she was the youngest of nine girls. She met and fell in love
with her beloved husband Floyd Cornthwait while riding on the back of his Harley. They were married
December 31st, 1951. They lived in PA until after the birth of their first four children, Tom, Gayle, Tracy
and Janet then moved to Sarasota, Florida in 1959 where their fifth child Gary was born. They raised
their children in Sarasota and later built their beautiful log home in Bradenton in 1983 where Millie
remained a resident the remainder of her life.

She will always be remembered as the best mother and grandmother God could have blessed a family
with. She enjoyed celebrating holidays, birthdays and any day she could share her table with others. Her
kitchen was filled with the smell of cooking and baking, her home was full of laughter and love. She had
a gift for nurturing. She and Floyd opened their hearts and home to all the children in the neighborhood
as well as anyone who was broken, weary and in need of a place to rest until they were back on their
feet. She loved unconditionally. She had the soul of an Angel; she was God’s hands extended.

Millie has left many, many warm and happy memories in the hearts of her family, extended family and
friends. She was affectionally known to all as either “Mom”, “Mum”, “Granny”, “Lady” “Millie”or
“Tommy”.

It comforts us to know she has been reunited in heaven with her husband of 57 years Floyd Cornthwait who preceded her in death 3/18/2009. She was also preceded in death by her son Thomas Cornthwait and Grandson Randy Parks. She will be deeply missed by those she leaves behind, her daughters Gayle Chancey (Arthur), Tracy Cornthwait (Jay Star), Janet Parks (Richard), and son Gary Cornthwait (Donna Jervis). Her Grandchildren, Ricky Parks, Katie Cornthwait, Elizabeth Chancey, Gary Cornthwait, Gabby Phipps (Ty), Ashley Chancey (Kayla), Justin Cornthwait (Shayna), Ryan Jervis (Chelsea), Sarah Chancey, Chris Cornthwait and Caleb Timmons. And her Great-grandchildren Lexi, Caleb, Layla, Daisy, Araiza, Davin, Emma, Declan, Jace, Liam, Ziva and Ryder.
Millie will be laid to rest beside her beloved husband in a small ceremony at the Sarasota National Cemetery.  There will be a Celebration of Life at River Life Church in Bradenton on 1/28/23 from 11:00 am to 1:00 pm where everyone is welcome.

In lieu of flowers donations can be made The Ronald MC Donald House of Tampa Bay.