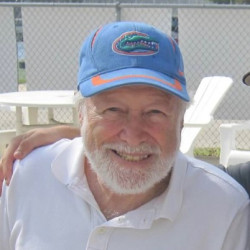 Born on January 5, 1936 to immigrant Ukranian parents, Irma and Irving Glantz, Michael grew up in Queens, New York and enjoyed all athletics, especially baseball, and was a stand out lefty pitcher at Forest Hills High School. He went on to play a short stint in the minor leagues and was a passionate New York Yankees fan.  Mike attended Syracuse University and was a member of the Sigma Alpha Mu (Sammy) fraternity.  Michael was a mechanical engineer and general contractor for most of his career and developed many townhomes and condominium complexes in Southwest, Northeast and Central Florida.  He took pride in his early career involvement as an engineer for NASA’s Mississippi Test Facility, testing rocket engines for the Apollo Program.  Michael enjoyed treasure diving, college and professional sports, and playing cards.  He was an avid tennis player and runner for many years.  He also enjoyed working out and walking into his 80’s.  Michael’s most enjoyable pastime was spending time with his family.

A private family service will be held Saturday, January 29, 2022. In lieu of flowers, the family requests that donations are made in Michael’s name to the Boys and Girls Clubs of America or Alzheimer’s Association.  Special thanks to Tidewell Hospice of Sarasota.