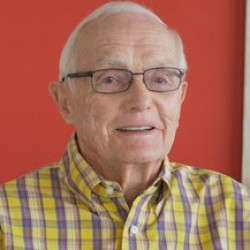 John Butterfield passed away on September 8, 2022 in his home at Plymouth Harbor in Sarasota.

John grew up in Nashville, Tennessee, and summered at White Lake, Michigan where he found his love of sailing. He attended high school at Montgomery Bell Academy in Nashville and served in the Navy during World War II in the South Pacific. After attending the University of Michigan he began a career in retail.

John’s career took the family from Connecticut to Kentucky to California to Hawaii where, when running Liberty House, he and his creative team conceived of “casual Fridays” to promote Aloha shirts. This was the beginning of casual dress in the work world. Later he moved to Minnesota, where he took a job as president of Donaldson’s Department Store and put back on his tailored suits. John became an entrepreneur with his purchase of Readex, a market research firm in White Bear Lake, Minnesota.

In 2001, he retired to Sarasota where he was active in the community, traveled extensively, loved to entertain, and played a great game of bridge.

Born in 1926, and adopted by Lyda and Archibald Butterfield, John loved his family and wrote a book called “Family Matters: Growing Roots and Wings.” He is preceded in death by his parents, two brothers, daughter Annie and survived by daughters Leslie and Kelly Butterfield and their husbands, 4 grandchildren and 7 great-grandchildren.

John touched many people’s lives throughout the world and will be greatly missed.

A service for family and friends will be held at St. Boniface Episcopal Church in Sarasota on September 25 at 3:00. Attendees are welcome to wear Aloha shirts or bright colors in his honor.