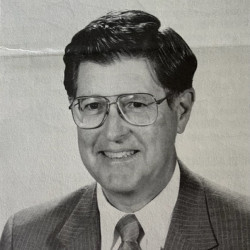 He was born in Glen Cove, N.Y. on December 19, 1933. He grew up in Poughkeepsie, N.Y. where he joined IBM after high school. He later earned a Master of Science Degree in Business from Columbia University in 1972.

He joined IBM in 1951 in the mail room, and held a variety of personnel management positions including Division Director of Personnel Programs and Manager of Corporate College Relations and Recruiting.

In 1987, after retiring from IBM, he served as President and Chairman of GEM, a National Consortium for Graduate Degrees in Engineering and Science for Minorities, headquartered at Notre Dame University.

He was an avid skier having served over 20 years on The National Ski Patrol in Massachusetts. He was also a very active golfer, starting as a caddy in 1948 at Jones Baird State Park.

He was a member of Our Lady Queen of Martyrs Church in Sarasota, Florida.

He is survived by his wife, Justyn, and many cousins, nieces, and nephews.

A memorial mass is planned for the future, the date and site to be determined.