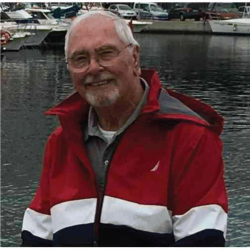 In 1977 he married Stephanie and she survives. He is also survived by their son, Andrew, as well as his mother-in-law Shirley Moorhead, brother-in-law and sister-in-law Dr. Stephen and Cynde Mattin, and nieces and nephews.

While in Ohio, the Smith family lived in Woodville and enjoyed many years boating on Lake Erie. In 1989 they moved to Sarasota where Craig and Steph shared great memories, vacations, cruises, and visits with family and friends, all with lots of love and laughter.

Services will be private. In lieu of flowers, please consider a donation to Tidewell Hospice, Sarasota, FL or the Cystic Fibrosis Foundation.