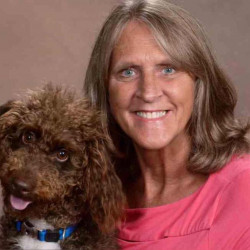 Christie Martin, 66, of Venice, FL lost her battle with cancer on July 29, 2022 at home surrounded by family.

She was born March 17, 1956 to Sharron Vogt and Jack and Judy Martin. She is survived by all three parents, brother, sister, niece and nephews, aunts and uncles and her loving son Trevor and fiancé Chelsea.

Christie graduated in 1974 from Centennial High school. She started working at 15 and had various jobs while attending college in Illinois and Florida, including a few years at Kennedy Space Center that she truly enjoyed. She graduated with her bachelors in finance from University of Central Florida in 1986 and began her 17 year career in Florida at Barnett Bank. She was a credit analyst, management associate, commercial credit manager, and VP commercial lender.

She moved back to Illinois in the mid-late 1990s to raise her five year-old son in the Midwest with family. There she was a stay at home mom for a few years, then a lender at Heartland Bank, and a CFO for Next Generation School, before her retirement in 2014.

During her time in Illinois Christie was very involved with Champaign West Rotary, as well as various community organizations and programs. She served on the Board of Directors throughout her time as a Rotarian and was Rotary President 2013-2014. She attended the Rotary International convention in Portugal. Christie volunteered for many community causes and programs.

Christie was enjoying a very active retirement in Florida. She loved the beach, shelling, going out with friends in her community and kayaking with a group from the South Venice Yacht Club.

No services will be held. She chose to be cremated and stay with her son and his family.