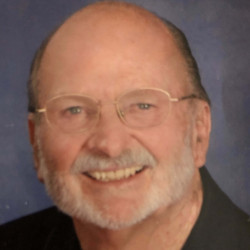 Bill was born November 20, 1934 in Dallas, Texas. He was raised in a Christian home by loving parents, Fay and Ralph Upchurch and had two brothers and one sister. Bill (Billy) was the youngest child. The family later moved to Austin, Texas where Bill graduated from Austin High School in 1953. Bill married in 1954 and was father of three daughters. His education continued at the University of Texas, graduating with honors in 1958, receiving a degree in Architectural Engineering.

In 1958, Bill was recruited by Southwestern Bell Telephone Co. (now AT&T) into their Junior Executive program. He continued this career for the next 14 years. The highlight of Bill’s career was working with NASA on the communication challenges during the 1969 Moon Landing. Bill always had a lifelong passion for architecture and an endless curiosity in “how things worked”. After the Bell Co. career, for the next 14 years, Bill pursued a career in real estate and commercial development, developing office complexes and resort condominiums. He always challenged himself to learn new skills and experience new adventures. Among many challenges, Bill pursued one of his greatest passions, flying airplanes and was successful in earning his pilot’s license.

During his life, Bill always had Jesus Christ as his Lord and Savior. In 1985, Bill felt called to serve the Lord. In 1986, Bill met his wife, Diana, and together they became Missionaries for the United Methodist Church. For the next 20 years, they lived “The Great Commission” by serving together as international missionaries in Wembo Nyama, Zaire (now the Democratic Republic of the Congo), Africa and Georgetown, Guyana, South America. While in Guyana, Bill worked with the Salvation Army and helped change lives through the drug abuse program and also the homeless program. He also supported Diana in her work to raise funds to establish the Ruimveld't Children's Home for children with HIV-AIDs.

In 2005, Bill and Diana retired from the international mission field and relocated to Ft. Lauderdale, Florida. Bill continued to serve his community through the First United Methodist Church, starting a jail ministry and creating “A Heart for the Homeless” ministry.

Bill was preceded in death by his parents, Fay and Ralph Upchurch, his brothers Ralph Jr. and Robert (Bobby), his sister, Margaret and his daughter, Margaret Ann.

In lieu of flowers, memorial donations can be made in Bill’s name to the First United Methodist Church of Ft. Lauderdale, 101 SE 3rd Avenue, Ft. Lauderdale, FL 33301 or the charity of your choice.